Virtual tour in the exhibition

In the realms of art, 25 years of collaboration between artist and galerist is a long time. In 1997, Carsten Frank showed his works at Galleri NB for the very first time. At that point in time, his paintings had an exquisit expression varying remarkably from other artists in Galleri NB. In accordance with the gallery’s profile, every artist is individually percieved as being powerful in ones full personality. As a benchmark, all artists are technically gifted and holds a personal expression, which when combined makes esquisit art works with an ability to fascinate the viewers. 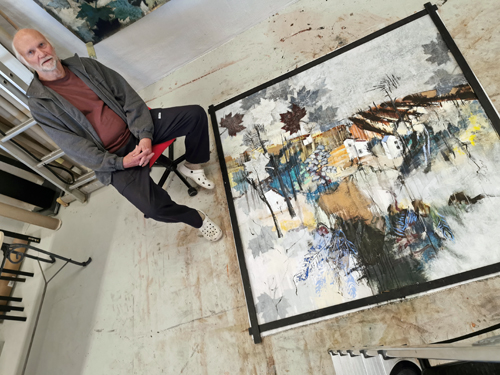 Carsten Frank is outstanding on those parameters. During the years, Carsten Frank has developed his artistry. In line with his personality, his great ability to explore whilst being open to new inputs always, has opened the doors to Malaga, Silkeborg, Iceland and The Faroe Islands. Thematics have been manifold; landscape paintings, sonic works, existential art pieces, the organized city. Never has it been heavy, rather surprising to us who have followed him along the journey.

Hence, this anniversary exhibition Ready-Mixed Nature is no exception. Many of the works carries traces back to his youth. Back then as a 16-year old boy, he was particularly interested in paintings by Hoffmeister and Engelund, which implies in various paintings of Carsten Frank aspiring to becoming a painter. The landscapes in the anniversary exhibition Ready-Mixed Nature is, as the title indicates, a mixture made of Andalusia’s burned and dry colors and the cold North. This mix stands out as a strong fusion paraphrasing the paintings from the youth. Besides this take, Carsten Frank adds up his stack doing side paintings, ornaments and symbols with the intention of bringing new dimensions and experiences to the main works. Among those mentioned themes, he has created more space for digressions - works that diverge from his themes, but that captures the personality of Carsten Frank as in being an dynamic and reflected artist.
There are more than just one good reasons to visit the Anniversary Exhibition in Galleri NB, and hopefully it will spark joy for new as well as old entusiasts of Carsten Frank’s work.